Are you looking for the best soundboard for PC and mobile? Well, we have sorted that one for you. The soundboard for PC is very powerful, not only can be adjusted to beautify your sound but also can increase the sound effect.

The right soundboard PC and mobile version can take the content from ordinary to extraordinary. So, let's get started with the best soundboard for PC as well as for Mobile.

What is a soundboard?

Soundboards can be physical as well as virtual. Soundboards are perfect as they can hold in sounds and beats that you can use anytime. Physical soundboards come up with some limitations.

They cost a good amount, and a limited number of sounds can be kept on them. On the other hand, virtual soundboards for PC can come in handy while having a huge space for storing as many sound bites as you want.

A huge space isn't the only benefit that comes with virtual soundboards. You can use hotkeys to different or your most-used sounds.

Using these free soundboard for PC, you can play with sound effects and create the required impact, drama, or mystery.

Many soundboard softwares for PC and applications work fine on high-end PCs or phones but give a tough time when used with a low-specification device.

However, that is not the case with MagicMic. It is compatible and works perfectly well with both Windows and Mac PCs. The software offers awesome features, and it comes at a user-friendly price. So, you can change your voice with a wide variety of filters, that too in real-time. So, you can make your gaming and voice chat more fun and unique.

Wondering where to get the best Soundboard for PC? Just try it out FREE now!

It comes with 125+ filters and is the voice changer on the market that contains the most pre-made voice filters.

It helps you to change the environment sounds because voice changing effects with background sounds.

Support shortcut keys to control the playback of sound effects and voice changes.

There are also tons of soundboard sound effects and soundboard memes to make the atmosphere even hotter.

It also provides the ability to do voice changes on recordings and audio files.

It's a new software, so it's not that famous yet.

The icons of several soundboard memes in the same category are the same, which is not intuitive enough to distinguish.

Popular Soundboard for PC on MagicMic

Use this incredible and fast real-time voice-changing soundboard app for your games, social media content, and more.

Whether you want to sound like a demon, a chipmunk, or a robot, voicemod is the best sound board app for it.Voicemod also allows you to add sound effects to your game.

It is a quite famous voice changer.

It comes with controller app on mobilephones.

Support shortcut keys to control the playback of sound effects and voice changes.

It has PGC platforms for you to upload and download sound effects.

You can use it to customize unique voice.

There are too many ads on all social media about this program.

It is not very stable since some users complain about that.

EXP Soundboard is a free soundboard software for PC and Linux. It's open-source software that can add sound effects, maintain hotkeys, and more.

If some sound clips come in your frequent use, assign some hotkeys to them. It allows you to use those specific sounds without launching the interface every time.

It is a tool that helps you play audio files and sounds with a few keystrokes.

You can add sounds to the database or use the pre-recorded sounds.

You can make a creation for the sounds you like.

It offers the function to play songs like loop playback is supported.

Its interface is boring and humdrum.

The function of this soundboard is limited.

Voxal Soundboard is by no means a soundboard, but it offers you a lot of voices. In this software, effects can be applied to existing files.

It offers various vocal effects like robot,girl, boy and so on.

You can add background noice to change environment sounds.

You can use it to apply effects to audio file recordings.

You can assign hotkeys to control sound effects so that you won't be interrupted.

It is lightweight but takes you over 20mins to download and install on my Windows PC.

The interface is old fashion.

The quality of voices and sounds are limited.

2.2: Soundboard Apps for iOS And Android

While working great for android, many apps don't do the same for IOS. Hence, we present the Soundboard Studio – a versatile, fast, and effective app to use on IOS.

You can give your audio, videos, and podcasts a professional and crisp sound by using Soundboard Studio.

It comes with huge library of sound effects.

It is a great sound player with background playback in trim, loop,solo control, and so on.

You can set tracks to fade in and fade out for sounds playback.

It also allows you to do voiceover.

It only allows you to use it free for 7days,and you need to pay for further use.

There is no functions about voice editing.

Are you looking for sound effects that can change your meme or content? Instant Buttons are just the best soundboard app for you.

The app is smart, easy to configure, and has sounds and audio memes for everything. Another factor that makes instant buttons popular is the easy-to-use user interface.

You can upload your own soundboard.

With the update,many sounds were cut off in weird places.

Enjoy using different meme sound effects in your videos, animated videos, and more. You will never have to search for another famous funny catchphrase or sound from your favorite anime show.

The Meme Buttons has it all. You can also enjoy category-based searches and save time. Hence, find the right and age-appropriate humor content for all your needs with the meme buttons.

There are gifs for some sounds.

You can use stop button for memes playback.

Are you looking for a simple soundboard app that comes with unique, visually appealing aesthetics? MLG Soundboard is just the right app for you.

A visually appealing design, an easy and simple interface, and the most recent memes are the package you get with MLG Memes Soundboard.

Split and play sounds as you will.

You can set sounds to alarm/notification/ringtone.

It allows you to upload your own soundboard.

It has smooth and simple interface.

All memes with the same icons make user difficult to identify them.

Finding the best soundboard sounds for your meme journey can be quite a hassle if you don't know what to look for. Fortunately, we come equipped with some of the best and most trending sounds you could ever wish for.

Below, we have listed the best sound effects for your meme-making journey, most of which are available on this list of soundboard apps that we made for you.

Famous for memes where suspicious activity is going and memes 2020 sound effects. The best sound effects include :

So, that brings us to our final question. What's the best soundboard for PC and mobile for you among the many we listed? None of these soundboard apps are best, and they each come with a unique function that makes them stand apart from the others.

My choice is MagicMic soundboard,how about you? Come and get best soundboard for PC using MagicMic from now! 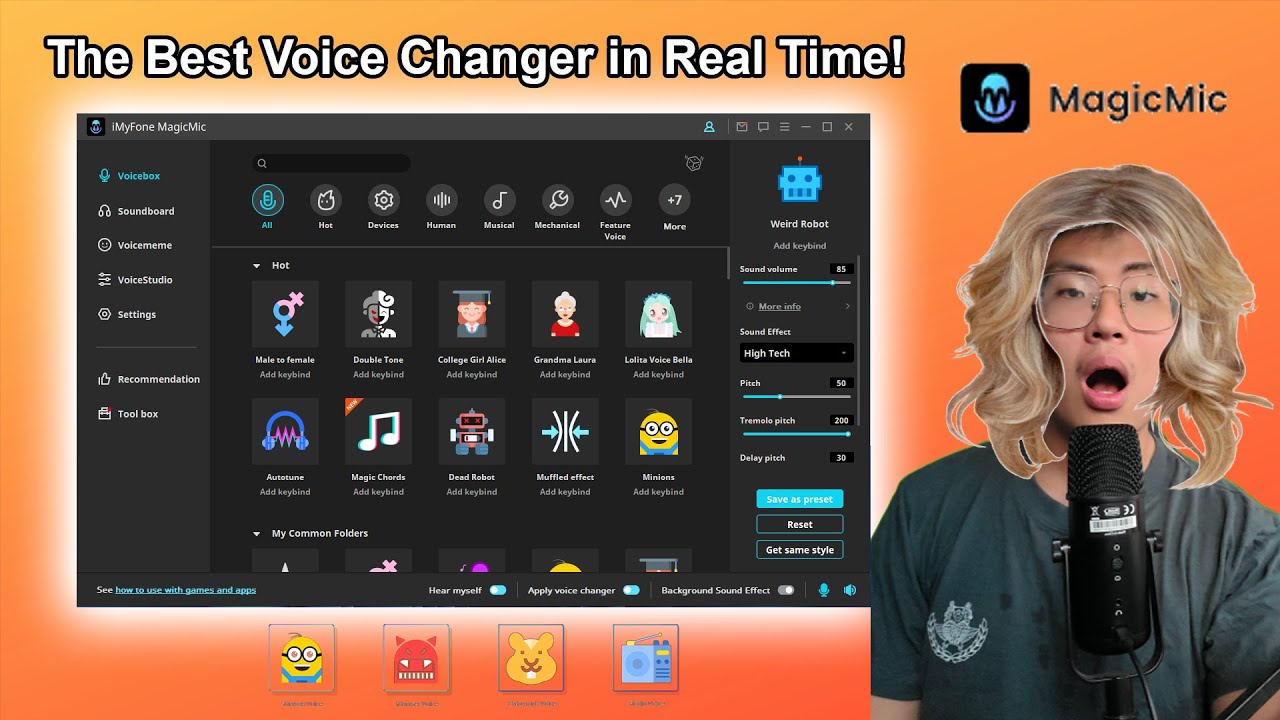