Hey Siri! How Can I Change Your Voice? | Crazy Siri Soundboard

It always feels good when you see a new feature on your mobile. Luckily for Apple users, a new feature Siri has been introduced for some time now, which helps you make suggestions, answer questions and perform actions. On top of that, Siri also allows you to convert your text into speech which is quite heartening.

However, you can't listen to one thing most of the time. It means you'd want to change something when it comes to Siri.

Luckily, you can shuffle the Siri voices to make them relevant and attractive. Moreover, it also allows you to alter your language.

In this article, we'll explain how to change Siri's Voice. Also, you can get the same voice in iMyFone MagicMic

Part 1: How to Change Your Siri's Sound Effect?

In the past, many people believed that Siri was a female and you couldn't change its voice. However, the fact is completely different from what people have been assuming for so long.

Apple had set a female voice on Siri as a default, and you've got the luxury to change it to a man's voice. Apart from changing Siri's Voice, you can change 6 different accents, including Irish, British, American, Australian, or South American.

Step 1: First of all, you'll only need to open iPhone settings and navigate to Siri & Search and tap on it.

Step 2: Now, you need to hit the Siri Voice option and select a Siri accent or voice you'd like. Surprisingly, you can navigate Siri's menu and ask it to change the voice. Interestingly, Siri will say that it can't change the voice, but it will take you to the settings menu to serve your purpose.

You can also change the Siri language with ease. Here's the guide to do it.

Step 2: You need to select a language from a dozen languages, including Italian, Chinese, Russian, Spanish, etc.

Step 2: Now, you'll need to navigate to the Siri Voice drop-down menu and choose a voice you'd like. In addition, you can also change your language after hitting the "Language" menu.

Part 2: Get Siri's Sound Effect without An Apple device!

Crazy things do happen in this world, and you'd be pretty surprised to know about the fact that you can play a sound like Siri without an Apple device. Yes, you heard it right.

iMyFone MagicMic is a precious voice changer that offers you "Crazy Siri" Sound Effects. These sound effects sound like Siri characters' voices. Whether you want to listen to a girl Siri voice or a male Siri voice, MagicMic has all it covered for you.

If you're looking to prank your friends on a birthday or intend to alter your voice in real-time gaming, opting for iMyFone MagicMic can help you get what you've expected. With its mind-blowing voice filters and terrific sound effects, it can surely make your job a lot easier than you intend it to be.

Fortunately, if you don't like MagicMic's library voice filters or sound effects, you can import your preferred option with minimal effort. All the voice filters and sound effects you'd get in MagicMic come with brilliant sound quality, meaning the voice changer can surely make your day.

On top of that, you don't need to put in some extra yards to alter your voice. Instead, MagicMic comes with an unbelievable simple user interface, eliminating all your fear you'd have developed before using this remarkable voice changer.

MagicMic is fairly easy to operate, courtesy of its intuitive user interface.

The interface and features of MagicMic get updated every week.

It allows you to play sound effects and use voice-changing filters simultaneously.

MagicMic only takes 3 MBs of space on your computer. 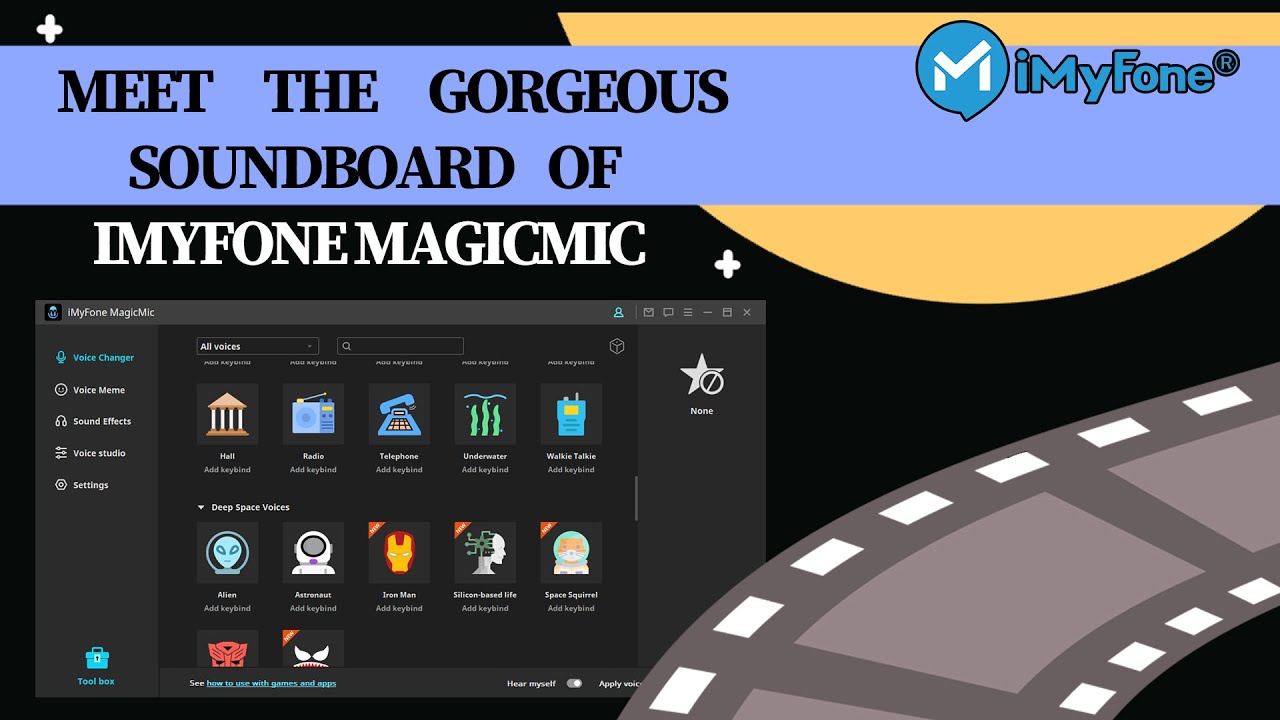 With the Venom sound effects of MagicMic, you can scare anyone. These sound effects are pretty horrific and come with the voices of ghosts and monsters.

If you want to feel like it is raining around you, MagicMic can provide fantastic rain sound effects.

You can learn more in this article:

You can also explore the fascinating gun sound effects using MagicMic as it blesses you with the tremendous sounds of guns firing bullets.

However, you can also play Siri-like voices without Apple devices using iMyFone MagicMic. It is a monumental voice changer that acts as a multi-dimensional player, meaning it can change your voice in real-time and at the same time can also help you to use sound effects in online games.